The Greek roots of the word “Catholic” mean “according to (kata-) the whole (holos),” or, “universal.” Growing up Catholic and attending a Catholic school this information was something I knew for a long time but the true universality of the Church came to life when I entered full-time missions.

“the Church is catholic because Christ is present in her; it is the fullness of the Body of Christ united with its head, having the fullness of means of salvation; and because her mission is to the whole human race.  These realities are seen in every parish, in every diocese—in all particular churches that are in communion with the Church of Rome.  In this way, universality is not a total as in a number.  Rather, universality exists in the complete union of faith and life among all Churches that profess the true faith, which subsists in the Catholic Church.” CCC 830-831

It has been such a blessing in this past year to see the different ways this universal faith is manifested and how when we are taken out of our comfort zone, we often times encounter Jesus, the heart of our worship, in a very radical way.

In the past few weeks I had the opportunity to welcome two of my friends from Taiwan here in America! During those two weeks we traveled to Arizona for the FOCUS student leadership summit (SLS20). One of my friends who joined me from Taiwan has been 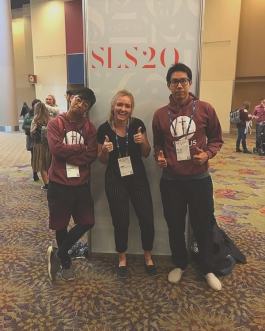 raised Catholic and has experienced Christ within the church back home in Taiwan but in this “stepping out” of his comfort Christ met him in a place of poverty. When we speak of missions, we talk a lot about “encountering Christ in the poor” which is such a beautiful and true gift; however, in our discomfort, we too become poor and Christ present in the poor meets us there in our own impoverished hearts. My friend went to confession for the first time in 11 years not because someone gave a really great convicting talk on the power of the sacrament of confession but rather because Christ radically encountered him in adoration. My friend has been to adoration numerous times throughout his life and actively participates in the ministry of organizing adoration nights in Taiwan but in the experience of encountering the universal church he was met by Christ in a new and life-chaning way.

While refelcting on his time in America one of my friends, Fred, wrote the following to be shared with you all,

“At SLS, I was very glad to see so many brothers and sisters coming to become missionary disciples. To me, a Taiwanese person where the Catholic population in our country is less than 1%, I have never seen a priest or sister giving such powerful and inspiring talks. And in the Expo hall, there are many opportunities to get to know missionaries, resources, and young people. We get renewed and transformed through meeting Jesus and spending time with His body. During the time in Nebraska, seeing the big sky, endless corn fields, and playing with the kids has brought me much satisfaction. People who do their jobs well everyday are remarkable! The good family value deeply rooted in the mid-west is a national treasure! It’s a pleasure to have spent such great time with the Nebraskans! Praise the Lord! One more thing I would love to address, the blessing that we have received comes from a simple and beautiful female and her mission team, who devotes their hearts to family and God, that’s the place where the story all begins.”

As mentioned, “Fred” and “Howard” of course loved exploring my small American town and getting to

spend time with my family and friends- going to basketball games, visiting the cows on the farm, seeing “real American guns,” and singing songs and playing instruments. Less obvious to them was the missionary aspects of their witness in their visit.

Their ability to behold and recognize the gift of having a priest who is young and has given his life to the church with a fire and zeal for souls or a church parish that has 3 priests ministering to hundreds of families; families that have 7+ kids! This recognition was missionary- missionary to me and to each person they encountered. Their ability to see the beauty of so many things we take for granted and to call us on in receiving those gifts with radical and renewed love.

In Pope Saint John Paul II’s encyclical, REDEMPTORIS MISSIO, He states, “85. Cooperating in missionary activity means not just giving but also receiving. All the particular churches, both young and old, are called to give and to receive in the context of the universal mission, and none should be closed to the needs of others. The Council states: “By virtue of…catholicity, the individual parts bring their own gifts to the other parts and to the whole Church, in such a way that the whole and individual parts grow greater through the mutual communication of all and their united efforts toward fullness in unity…. Between the different parts of the Church there are bonds of intimate communion with regard to spiritual riches, apostolic workers and temporal assistance.”

As I prepare to return for my second year in Taiwan, I pray that we be not afraid to receive missionary witness as we go forth loving with our own missionary hearts; that the catholicity of our faith will ravish our hearts. Let us pray for unity in our universal church and let us meet each other in unity at the heart of the Eucharist.

“One of the central purposes of mission is to bring people together in hearing the Gospel, in fraternal communion, in prayer and in the Eucharist. To live in “fraternal communion” (koinonia) means to be “of one heart and soul” (Acts 4:32), establishing fellowship from every point of view: human, spiritual and material. Indeed, a true Christian community is also committed to distributing earthly goods, so that no one is in want, and all can receive such goods “as they need” (cf. Acts 2:45; 4:35). The first communities, made up of “glad and generous hearts” (Acts 2:46), were open and missionary: they enjoyed “favor with all the people” (Acts 2:47). Even before activity, mission means witness and a way of life that shines out to others.” Mission of the Redeemer 26.

Thank you also again to everyone who had been praying for the travels of my missionary friends and helped to make their time here in America so very blessed! 🙂 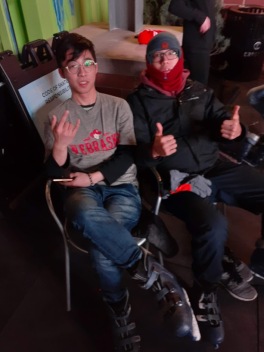 ice skating at the railyard

Follow this link to learn more about joining my mission support team!

All donations are tax-deductible